Which One Fills Your Heart? 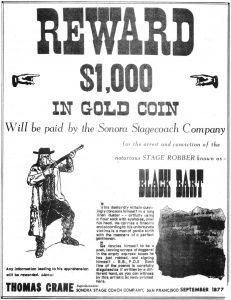 Black Bart terrorized the Wells Fargo stage line for thirteen years, roaring like a tornado in and out of the Sierra Nevada’s, spooking the most rugged frontiersmen.

During his reign of terror between 1875 and 1883, he is credited with stealing the bags and the breath away from twenty-nine different stagecoach crews.

A hood hid his face.  No victim ever saw him.  No artist ever sketched his features.  No sheriff could ever track his trail.  He never fired a shot or took a hostage.

He didn’t have to.  His presence was enough to paralyze.

He reminds me of another thief-one who’s still around.  You know him.  Oh, you’ve never seen his face, either.  You couldn’t describe his voice or sketch his profile.  But when he’s near, you know it in a heartbeat.

If you’ve ever been in the hospital, you’ve felt the leathery brush of his hand against yours.

If you’ve ever sensed someone following you, you’ve felt his cold breath down your back.

If you’ve awakened late at night in a strange room, it was his husky whisper that stole your slumber.

It was this thief who left your palms sweaty as you went for the job interview.

It was this con man who convinced you to swap your integrity for popularity.

And it was this scoundrel who whispered in your ear as you left the cemetery, “You may be next.”

His task is to take your courage and leave you timid and trembling.

Fear of death, fear of failure, fear of God, fear of tomorrow-his arsenal is vast.  His goal?  To create cowardly, joyless souls.

– The Applause of Heaven, Max Lucado

God says – Fear not, for I am with you.  Be NOT afraid, I am your God.  Be STRONG and COURAGEOUS.  I will NOT fail or forsake you.

Which one will you choose to dwell on?

Go in the peace and confidence of Christ,