This month we have seen cancellations of all kinds of events motivated by the fear of contracting the Coronavirus.  We must be smart and diligent, but not allow fear and worry to control our lives. Arthur Roche has said, “Worry is a thin stream of trickling, through the mind, if encouraged, it cuts a channel into which all other thoughts are drained.” We trust that everyone will take the proper precautions to prevent the spread of this unprecedented virus.

Let’s get rid of the RODENTS OF FEAR! Read on…

Years ago, in the pioneer days of aviation, a pilot was making a flight around the world. After he had gone for some 2 hours from his last landing field, he heard a noise in his plane, which he recognized as the gnawing of a rat. He realized that while his plane had been on the ground a rat had gotten in. For all he knew the rat could be gnawing through a vital cable or control of the plane. It was a very serious situation. He was both concerned and anxious. At first he did not know what to do. It was 2 hours back to the landing field from which he had taken off and more than 2 hours to the next field ahead. Then he remembered that the rat is a rodent

. It is not made for the heights; it is made to live on the ground and under the ground. Therefore the pilot began to climb. He went up a thousand feet, then another thousand and another until he was more than 20,000 feet up. The gnawing ceased. The rat was dead. It could not survive in the atmosphere of those heights. More than 2 hours later the pilot brought the planes safely to the next landing field and found the dead rat. 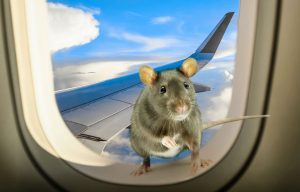 Brothers and sisters in Christ, worry is a rodent. It cannot live in the secret place of the Most High. It cannot breathe in the atmosphere made vital by prayer and familiarity with the Scripture. Worry dies when we ascend to the Lord through prayer and his word. Clovis Chappell, Questions Jesus Asked.

The 2020 Coaches of Influence Golf Tournament is still on! At this time the banquet is a no go, however, we do still plan to golf…of course things may change, but we will keep you up to date on what is happening.

Link to the Golf Tournament on our facebook page

Link to the Golf Tournament Registration on our website

Thank you friends, and remember – God says to “FEAR NOT, for I am with you!”

Believe it or not,
Nelson Cook